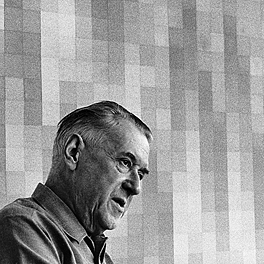 Richard Paul Lohse was born in Zürich in 1902. The young Lohse dreams of becoming a painter. However his wish to study in Paris is thwarted due to his difficult economic circumstances. In 1918 he joins the advertising agency Max Dalang where he trains to be an advertising artist. Lohse, the autodidact, paints expressive, late cubist still lifes. In the 1930s his work as a graphic artist and book designer puts him among the pioneers of modern Swiss graphic design; in his painting he works on curved and diagonal constructions.

In 1937 Lohse, with Leo Leuppi, cofounds Allianz, an association of Swiss modern artists. In 1938 he helps Irmgard Burchard, with whom he is married for a brief time, to organise the London exhibition "Twentieth Century German Art". His political conviction leads him into the resistance movement where he meets his future wife Ida Alis Dürner.

1943 marks a breakthrough in Lohse's painting: he standardises the pictorial means and starts to develop modular and serial systems. In 1953 he publishes the book "New Design in Exhibitions", and from 1958 he is coeditor of the magazine Neue Grafik/New Graphic Design. Important exhibitions and publications bring Lohse's systematic-constructive art and constructive graphic design worldwide acclaim. He died in Zürich in 1988.